This History of the Autocorrect is as Fascinating as it Sounds 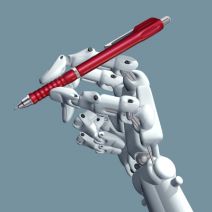 How often does autocorrect breathe down your neck when you type out emails or documentation? We might have it now, but before autocorrect was introduced, every little mistake had to be resolved manually, without the help of technology. So, we salute you, autocorrect; saving us from the grammar police since the early 90s.

Autocorrect is actually a pretty fascinating little program. In particular, its manner of selecting the proper spelling and usage of a word is surprisingly complex. Autocorrect was originally created out of a system that had previously existed in Microsoft Word as a glossary. This glossary allows for the expansion of existing text, either with an established replacement text or even adding an image.

Autocorrect was first established by Dean Hachamovitch, a former vice president of Microsoft. Hachamovitch (thankfully, autocorrect works on his name) realized that the glossary feature could be used to add more functionality to Microsoft Word. The first word which autocorrect targeted was teh, a common mistake that appears all over the place on both the Internet and even in professional environments. Hachamovitch created a script that could automatically fix this error by hitting the left arrow key and F3 simultaneously, but the concept later evolved to make the feature more “automatic.” Since English is very space-oriented language (we use a lot of spaces in our writing), autocorrect could be triggered upon hitting the spacebar; thus, making it much more convenient for everyone.

Afterward, it was simply a matter of figuring out what the most commonly misspelled words were. Some of Grove Networks’s favorite misspellings are as follows:

So, how does autocorrect figure out which words need to be replaced? There are some that Microsoft simply cannot condone being used in autocorrect, like obscenities, which are never suggested or flagged. The replacements for other words are determined according to these factors:

So, the words suggested through autocorrect are chosen through the overall context of the sentence it’s being used in. It lends itself to the literary terms prescriptivism and descriptivism; how words should be used, and how they’re actually used in the context of the language. Some words and phrases are often used when they shouldn’t be, or the writer is trying to say something completely different. Autocorrect is responsible for (somewhat) fixing these issues.

Despite autocorrect’s somewhat humorous faults at times, it’s an integral part of ensuring your team puts together error-free emails and documents. Technology can do all sorts of great things for your business. Give Grove Networks a call at (305) 448-6126 to learn making technology work for you.