Did My Samsung Device Just Wink? Is it Spying on Me? 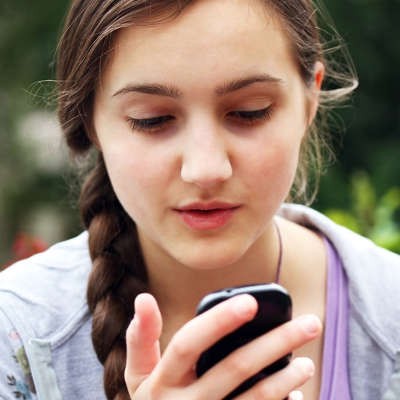 Occasionally, some Samsung smartphone users might see something strange appear at the top of their device’s screen--an eyeball. It will show up for a brief second and then disappear. What gives Samsung? Are you spying on me? For this blog, we’ll get to the bottom of this, as well as go over the symptoms of a device that is compromised.

First off, know that the appearance of an eye icon doesn’t mean that you’re being watched by a hacker. It’s a Samsung feature called Smart Stay, and when you see the eye, it means that the feature is activated.

What is Smart Stay?
Smart Stay is a clever feature that uses your device's front camera to sense when you are looking at the device. Once your face (or any face) is detected, Smart Stay will then prevent the screen from turning off, overriding any screen timeout setting. As you can imagine, this is a very helpful feature that prevents your screen from turning off while you’re reading a blog or an email, which can be a frustrating experience.

You can adjust the feature from the Android home screen by going to Menu > Settings > My Device > Smart screen. From here, check or uncheck Smart Stay to turn the feature on or off. Of course, it’s such a helpful feature that you’ve really got no reason to turn it off. That is, unless you want to conserve battery power.

How Do I Know if My Phone is Compromised?
Now that we’ve established that Samsung’s Smart Stay feature is not spying on you, let’s go over some symptoms that you’ll see on your phone if it is hacked. Depending on the nature of the hack, some of these symptoms could even mean that someone may actually be spying on you via your phone.

Of course, if you have any suspicion whatsoever that your phone is hacked, then it’s a smart move to turn off the device’s Internet connection, or even power it down completely. You’ll then want to take your phone to an IT professional like the friendly technicians at Grove Networks for us to confirm or deny your suspicion, and then remove the threat entirely should we find one.

In today’s hack-happy world, it’s good to be suspicious when you see something on your device that you don’t understand, like perhaps the Smart Stay eyeball. Grove Networks is standing by to assist you when you encounter your phone doing something that you don’t understand, because when it comes to your personal data, it’s better to be safe than sorry!